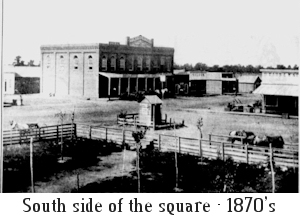 “Let me give you a name of a land-office man in Nevada. Nevada? Ren was confused. Nevada, Missouri, not the state! It’s a little town east of Fort Scott.” Excerpt from Lost Trails By Louis L’Amour, Chapter To Shoe a Horse, page 58. Pinnacle Books, 2007

On October 1, 1855, a special commission of non-residents selected the site of Nevada. The entire 50 acres cost the county $250. The following day the commission reported its action to the county court, and the body approved everything that had been done.

Because of its natural advantages, the county court wanted to name the new town “Fairview.” But Colonel D.C. Hunter, county and circuit clerk, objected and reminded the judges that there was already a village of that name in Cass County.

Presiding Justice Still then said, “Well, Hunter, you give it a name.” 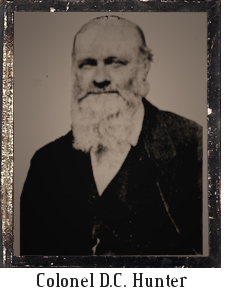 Hunter had been a California gold-seeker and recalled some pleasant thoughts of the town of Nevada City, the county seat of Nevada County, California. He suggested that the new capital of Vernon County be named in honor of the little town on the Pacific slope. The court after some discussion as to the propriety and relevancy of the name, finally acquiesced and the town was named Nevada City.

In the spring of 1856 Col. Hunter constructed a home, this house was the first building completed in the town. Col. Hunter’s house was used for a courthouse when court was first held in Nevada, and the colonel built a smokehouse in which he allowed the Grand Jury to deliberate.

In the November election of 1860 Vernon County residents did not cast one vote in favor of, soon to be president, Abraham Lincoln. One old man tried to vote for Lincoln, but was turned away from the polls. A battalion of Vernon County was organized which took part in the Battle of Wilson Creek, Battle of Big Drywood, and the skirmish of Montevallo.

In 1863 murders, arsons, robberies of every sort were common. Nevada was preyed upon by both the Kansas Jayhawkers and Cedar County militia. The Federal militia considered Nevada City the “Bushwhackers” capital, and determined to burn the city and get rid of the “Bushwhackers.”

On May 25, 1863, Captain Anderson Morton, commander of the St Clair and Cedar County militia ordered his soldiers to burn the town and kill all the bushwhackers. All buildings were to be burned, but the household goods were to be spared. The soldiers marched to each house and said to the resident “We are going to burn this house; get your things and get out in 20 minutes. If you want any help we will help you, but the house must be burned.” 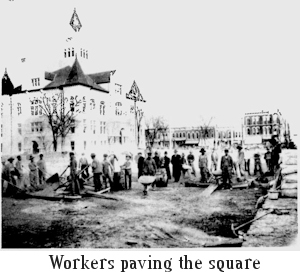 In all, about 75 house and other buildings were burned. The courthouse, stores, and the best dwelling house were all destroyed. Only about a dozen houses were spared. After the close of the war the smell of fire was on everything and the town sat solitary on the prairie. It was not raided anymore, for it was not worth raiding, but occasionally war parties passed through and said, “Here is where Nevada City once stood”

Rebuilding itself out of the ashes in 1868, homes and business, which has been destroyed, were rebuilt. New modern buildings were erected. Many immigrants came to the county to start a new life.

Nevada City was incorporated in 1869, at which time it dropped the word “City” from its name. The city’s first sidewalks were made of wooded planks. Nevada has its first police and about 300 persons were living in Nevada.

Excepts from the Sunday Edition of the October 30, 1983 Nevada Herald story “Nevada rose from ashes after the Civil War”